You know how it is, your favourite skirt, worse for wear, is languishing at the bottom of the wardrobe, also hanging on in there, is a long silk sheath dress in a difficult combination of colours and moreover too tight around the hips for comfort. Yes, if like me you are a sucker for quality fabric at knock down prices then fear not, here is a project to accommodate both pieces and get them out of the wardrobe and back on to the street or in my case onto the set. 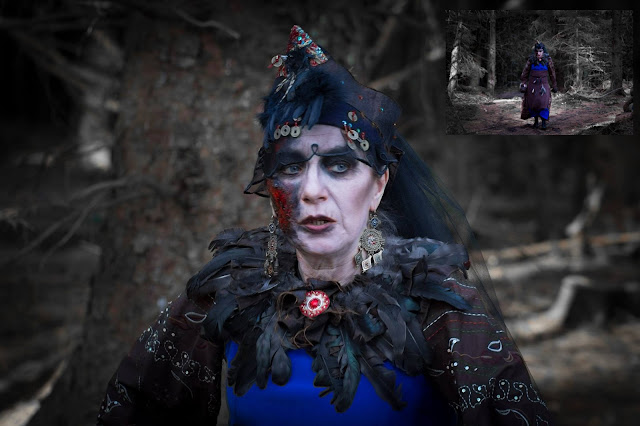 Over Christmas and the New Year 2014-15 my niece, the filmmaker, Vic Lock and I discussed her upcoming project for which she had asked me to create the costumes. The inspiration for the above dress was taken from the idea that although the screenplay was based on an old Estonian folk legend, there would be no rigidly fixed geographical or costume references. I just had hints and colour combinations received from mood boards and an idea of each costume being inspired by a signature wild creature. In the case of Rosie's character I chose one of the standard Gothic Witch familiars, the Raven. 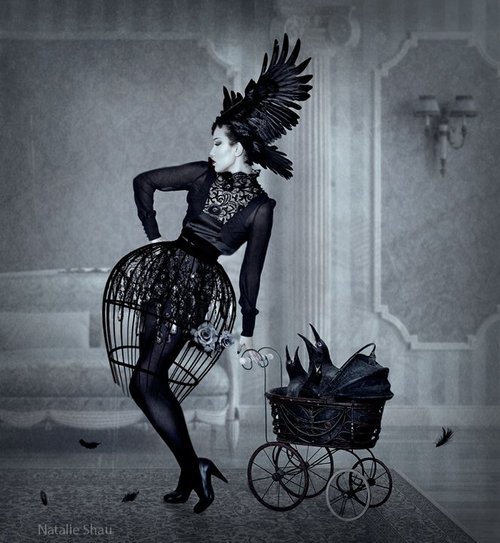 I started by building up a Pinterest board. This was fun and I found many images to inspire me, such as Madre by Natalie Shau, via Tina Tarnoff's blog: Thought Patterns. In the spirit of mend and make do - very common amongst independent film companies, I wanted to use fabrics and notions which I already possessed. This not only helped with the tight film budget but also allowed me to get creative with a backlog of materials which needed to be seen. Fabrics should move. I'd boxed mine up for too long, gloating over my hoard like a dragon with its gold.

This was a Christmas present from way back and I had worn it so often, the lining was beginning to creep disgracefully into old age. The fabric design was a vague mishmash of ethnicities, also typically for a mass-produced, machine-stitched skirt it had more embellishment on the front. 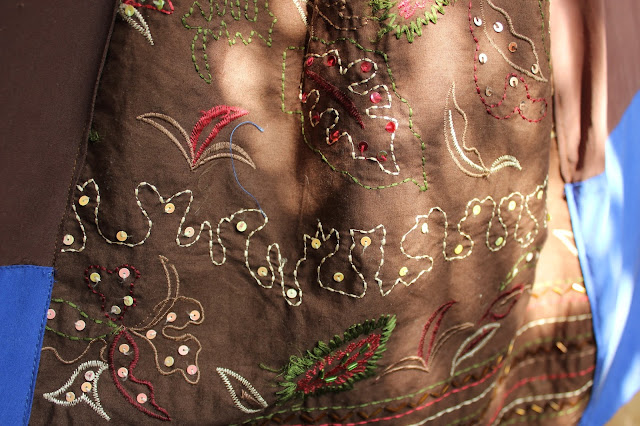 I calculated that I could get at least two if not three inserts out of it to fill out the skirt of the sheath dress and that there would be enough left over to make reasonably full, leg o'mutton sleeves. An added advantage was the colour which was a great match and broke up the rigid lines of the stripes and created what I wanted, my take on a sarafan or Russian trapezoidal pinafore dress. These type of traditional costumes are redolent of many Eastern and Northern cultures. This one I pinned from folkcostume.blogspot.jp and shows a 1930's Hungarian dress from from the town of Mezőkövesd and its environs, famous for their embroidery. I was particularly concerned to get the trompe l'oeil effect of an apron over a skirt aka pinafore dress. 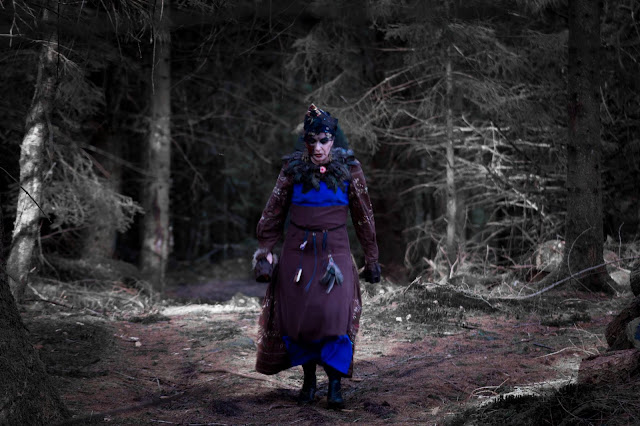 I was also very happy I had enough material in the seams to open up the sheath dress and to insert three sections of embroidered skirt. Whilst in the planning stages, I contacted my niece to check on how much movement Rosie needed in her costume and found that one shot required her to run through the forest! After that I decided to check with her for each costume but the script revisions and even the shooting dates were posted so well in advance and I could find from the schedules exactly what was required physically of each character. This also helped to inspire the costumes too, as for example, when I found ballet was on the bill, I went off on a whole new tangent.

One of my weaknesses is that I always buy silk whenever it is at a knock down price. This means I have a plethora of scarves but also items like this silk sheath dress, which I bought two decades ago from Next to Nothing in Birmingham U.K. for a couple of quid. I had Rosie's measurements up on the pallet wood dress form Andy had made me and calculated that to split it along the seams up to the hip would give her plenty of movement and the required full trapezium shape of the sarafan. 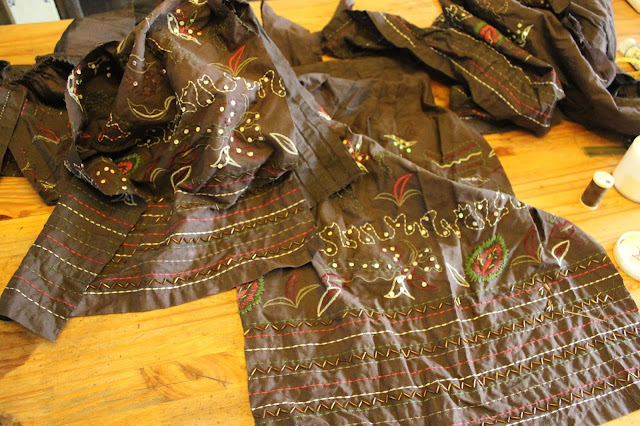 I cut my three inserts from the front of the skirt, thus exhibiting the best of the beadwork for the hem of the dress. Above you can see the raw broken-down skirt skirtfront with one of the inserts in the foreground and before pressing! I then cut the sleeves from the back of the skirt, with the sleeves and the inserts running in opposite directions on the fabric. Thus I used the gathered sections of fabric, which made up the waistband of the skirt to full effect. In the former case this was to create the triangular side and back pleat and in the latter to create the cuff of the sleeve and the leg o'mutton top. 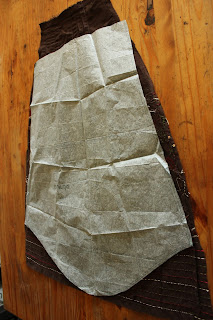 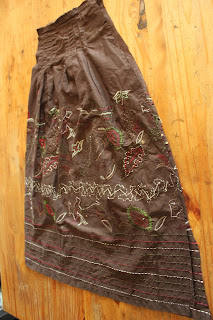 I just used an old sleeve pattern that I liked but it would have been as easy to cut the sleeve out simply by eye, as the back of the skirt, once folded makes a natural sleeve shape! You can see how the cuff forms by itself and the leg o'mutton top is a natural progression from the shape of the skirt. 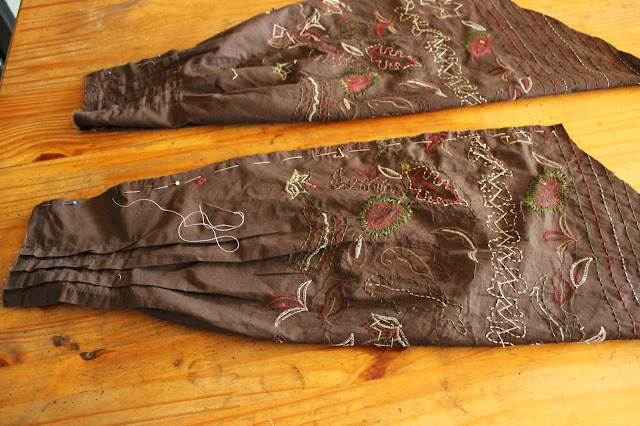 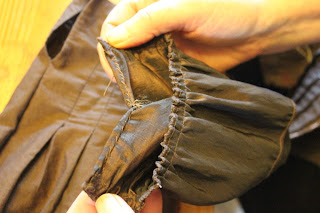 I eased the top of the sleeve into the sheath armholes, neatened the cuffs and embellished them with a hem ruffle from an another defunct old skirt in the same tones. As you can see I toyed with the idea of using a fake fur remnant left over from a wolf puppet but eventually settled for real chicken feathers from my own poultry.

However, I did use a fake fur motif on one cuff and on the other one, added a few of the beads from remnants of fabric from the front of the skirt.

Making your own clothes is just the same as cooking your own meals, you become more aware of how things are put together and thus a better judge of good workmanship. When I buy a dress, for example, I turn it inside out to look at the seams and always check fastenings, in particular zips. In the case of this silk sheath dress, I fully expected it to be cut to the absolute limit to save on fabric and therefore costs, so adding the gussets was an ideal way of modifying it to fit. Here you see me easing these latter into the sides of the dress. As I mentioned before, typically the front panels of the skirt are more luxuriously embellished, here with bugle beads, some of which were missing and I replenished from remnants. These beads also added some weight to the finished frock's hem, improving both the way it hung and the way I envisaged it would look when Rosie moved. 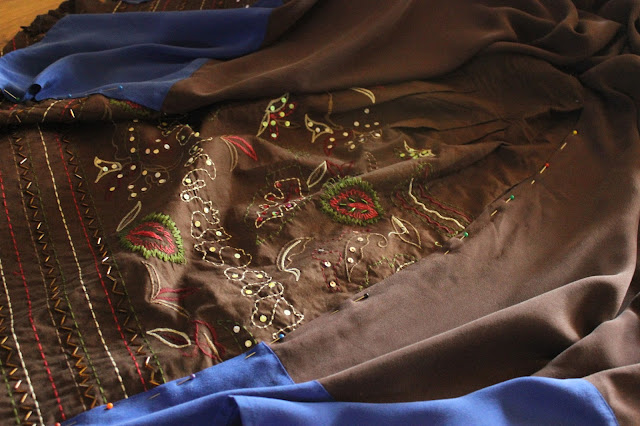 As already explained, I had decided to split the silk sheath dress to the hip on both side seams but I found that the length of the gusset or insert made from the whole length of the skirt was just a few centimetres short. I therefore, cut some triangular pieces out of remnants from the skirt back and embellished them with a few beads to match up with the design on the hem. I also added another row of embroidered stitching. 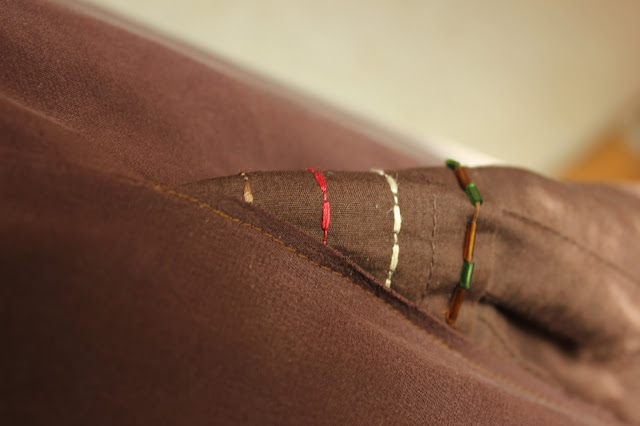 I then fitted the gusset at the back of the dress buy opening up the back seam, this again added weight and movement to the final costume. 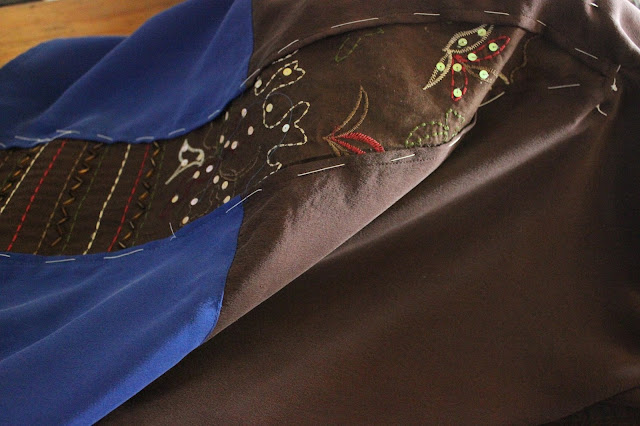 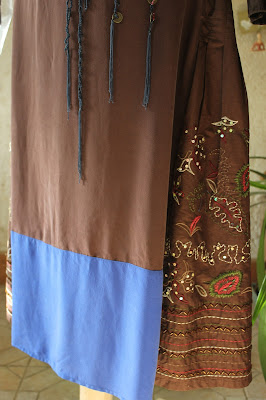 So here we have this pinafore dress/skirt sheath fusion, before I started adding the elements to make a complete costume but quite ready to be worn out on the street or to a party. The trapezium-shaped shift was also a traditional maternity dress, so here too you have the chance to make a chic, romantic party frock from refashioned presently unwearable garments. You can however, see the start of the chatelaine, which can be found here and it also shows the trompe l'oeil apron look of the sarafan I was hoping to achieve.


If you have enjoyed this piece and found it useful think about sharing it and also about joining this blog to be assured of new posts. Please also feel free to ask questions or make comments in the section below.


All the very best,
Sue

This project was a great deal of fun because although I had the design firmly set in my mind when I started, I still allowed it to...read more

How to make a chatelaine for a witch costume - refashioning project

All the essentials for the best dressed witch from refashioning and recuperated materials...read more Mining a myriad of jewels form the darkest depths of the wardrobe!

SCROLL DOWN TO SEE MY OTHER SITES

Upcycled Wardrobe, Costume & Clothes is a participant in the Amazon Services LLC Associates Program, an affiliate advertising program designed to provide a means for us to earn fees by linking to Amazon.com and affiliated sites. 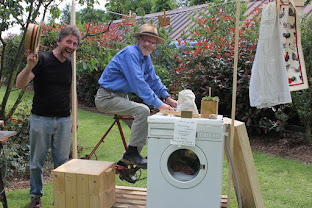 Latest Project - How to convert your washing machine to pedal power